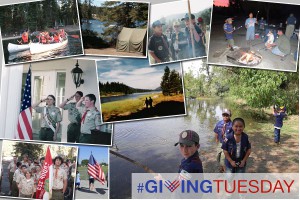 Give the Gift of Scouting this Holiday Season

On Tuesday, December 1st, charities, families, businesses, community centers, and students around the world will come together for one common purpose: to celebrate generosity and to give. This #GivingTuesday we ask that you give the gift of Scouting.  END_OF_DOCUMENT_TOKEN_TO_BE_REPLACED

Posted on November 16, 2015 by Bryan Wendell from Bryan on Scouting

Get ready to roll up the tent, stuff the sleeping bag and grab the flashlight. Because in 2016, Boy Scouts will do more camping than ever.

In a nod to the BSA’s century-old emphasis on preparing young people to spend time outdoors, the number of campouts required for First Class in Boy Scouting will double beginning in 2016.

This ensures that First Class Scouts will have enough camping experience to develop and improve on the outdoor skills promoted in Scouting.

This is the latest in a series of posts where I take an in-depth look at changes coming to Boy Scouting next year.

I’ve already blogged about service hour requirements increasing, Scout becoming its own rank and Boy Scouts telling about their duty to God at each rank. You can read more about changes to Boy Scouting (and, for that matter, Cub Scouting and Venturing, on the Program Updates page.)

Note that these nights are cumulative. The key words are “since joining.” A boy needs one night for Tenderfoot, two more for Second Class and three more for First Class.

New: One night (no change)

Spend at least one night on a patrol or troop campout. Sleep in a tent you have helped pitch.

Old: One more night, for two total since joining

Since joining, participate in five separate troop/patrol activities, three of which include overnight camping. These five activities do not include troop or patrol meetings. On at least two of the three campouts, spend the night in a tent that you pitch or other structure that you help erect (such as a lean-to, snow cave, or tepee).

Old: One more night, for three total since joining

Since joining, participate in 10 separate troop/patrol activities, six of which include overnight camping. These 10 activities do not include troop or patrol meetings. On at least five of the six campouts, spend the night in a tent that you pitch or other structure that you help erect (such as a lean-to, snow cave, or tepee).

What counts as camping?

On at least five of the six overnight campouts used toward First Class, the Scout must “spend the night in a tent that you pitch or other structure that you help erect (such as a lean-to, snow cave, or tepee).”

That means the sixth night could be spent in a cabin, for example.

What about Star, Life and Eagle?

Requirement 9a for Camping states:

Camp a total of at least 20 nights at designated Scouting activities or events. One long-term camping experience of up to six consecutive nights may be applied toward this requirement. Sleep each night under the sky or in a tent you have pitched. If the camp provides a tent that has already been pitched, you need not pitch your own tent.

All campouts since becoming a Boy Scout or Varsity Scout may count toward this requirement, including those used to fulfill the requirements for Tenderfoot, Second Class and First Class.

When do you use these new requirements?

Extreme mountain biking and other outdoor activities can help keep Scouts in the program longer. (Photo by Roy Jansen)

What’s the one thing the Scouting program can’t live without? Scouts.

The Boy Scouts of America offers the premier program for youth, but Scouts need the means and desire to stick around.

END_OF_DOCUMENT_TOKEN_TO_BE_REPLACED

From Bryan on Scouting Blog Giving-CPR

Let me begin by saying that you can’t learn how to perform CPR from a blog post.

Consider the CPR guidelines below to be a jumping-off point before you take more-formal training.

And yes, you and your older Scouts and Venturers need to get trained in CPR. It could be the most important training you ever take.

END_OF_DOCUMENT_TOKEN_TO_BE_REPLACED

The Boy Scouts of America and the National Council on Patient Information and Education (NCPIE) developed the SCOUTStrong Be MedWise Award as an interactive way to educate members of Boy Scouting, Venturing, and American youth in general about the importance of safely and responsibly using medicines. END_OF_DOCUMENT_TOKEN_TO_BE_REPLACED

Older Entries
Charters are due in the Office by no later than December 31st 2015!.